Big mover overnight was the Aussie on the back of CPI data showing to be lower in 2013 Q4. This has seen any chance of a rate hike this year vanish in a puff of smoke. To a certain extent the drop from the highs for AUDUSD has priced in a fair amount of sentiment concerning the unlikelyhood of a rate hike this year given the rhetoric from the RBA on neutrality and stable rates. A look across the Aussie pairs shows the knee jerk reaction has stalled and signs of a pullback are cropping up on the charts. I have read talk of the AUDUSD down as low as .91 but I view the situation as good for the Aussie. Fears of inflationary pressure are gone but the fundamantals in the country are still bullish for the currency and increasing talk of the fears of a meltdown in China being overblown are also Aussie positive.  I am waiting to let these moves finish and see what the reaction is in the European and US trading.

We are currently long USDJPY but the pair is doing a fantastic job of doing not a lot. The bids at the 50 keep it amused for a while and then it runs back for some more. the pair’s inability to break the 50% Fib is now giving me a little concern. 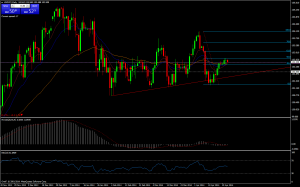 In the longer run I can’t see many grounds for Yen strength unless problems seriously escalate in the Ukraine, currently the discussions are more political than they are bloody so the demand for a safe haven in the Yen is minimal. The increasing activty of the GPIF should weaken the Yen and accomodative policy seems to still be in favour if the next tax hike is to be implemented in Japan. I can’t say the US$ is filling me with bullish enthusiasm and I think towards the end of this year economic data will be starting to disappoint the Fed and institutionaöl economists as they are behind the curve in the structural economic changes that are negatively effecting employment rates…. these elememts are simply not in their models. In the short term the trend is bullish but I will be convinced when I see a convincing break and hold of the 80 level