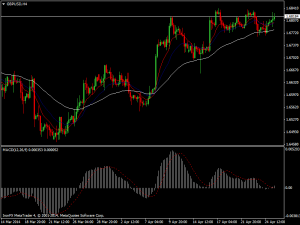 GBPUSD on the H4 has hit a resistance level 3 times now, could this be the end of the uptrend? With lowers highs twice in a row I think it may be. With it holding the 55 on the way up, a break on the downside could indicate a bigger move down. Yesterday was the first time since near the beginning of the month where it has closed below the 55. With it at the most recent high, a longer term sell could be in order.