Gold is awaiting for certain direction

The gold has reacting bearish against USD after yesterdays’s higher than expected US Core CPI (Consumer Price Index) and lower number of Continues Jobless Claims data.

It has dropped down to support level of 1290.88, and remained just under 1298 level. Since it has clearly break through the support line as shown in 4 hourly chart above, the precious metal is not choosing a direction. It has expected to head upwards or downwards direction after US building permits and housing starts data’s will be released later today at 13.00 (GMT) and 14.55 (GMT). Also, it has suggested to keep eye on the developments in Ukraine crises. 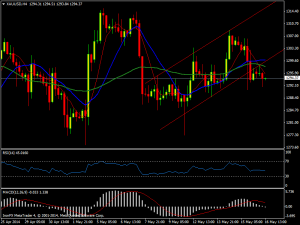