Risk appetite has rebounded significantly in the past few days but what are the drivers. The rally (or should that be short squeeze) in the oil price continues, with WTI now up over 18% off its lows and Brent Crude well over 20% higher (and in official bull market territory). Also with the new Greek government finding a few allies across Europe (notably France) in its quest for renegotiation of its debt, but also coming up with a plan that avoids haircuts for its bondholders, the market has responded well. Both of these factors have contributed to the improvement in sentiment with equity markets rebounding strongly and forex major such as the euro gaining ground.

During the European day, we get the final service-sector PMIs for January from the countries we got the manufacturing data for on Monday. As usual, the final forecasts from France, Germany and Eurozone are the same as the initial estimates, while the UK service-sector PMI is expected to have increased slightly. The revisions in the final manufacturing PMIs on Monday, increase the possibilities that we could see revisions in the service-sector PMIs as well. Eurozone’s retail sales for December are also coming out and they are expected to have remained unchanged from the previous month. In the US, the most important indicator we get is the ADP employment report for January two days ahead of the NFP release. The ADP report is expected to show that the private sector gained fewer jobs in January than it did in the previous month. The final Markit service-sector PMI and the ISM non-manufacturing index, both for January, are also to be released.

FTSE: The FTSE 100 closed sharply higher at 6871.80, adding 1.32% on the day having edged closer to its all time high around 6930, supported also by the change of mood regarding Greece future and the strong oil recovery. Among the daily winners were banks and energy related equities. Because of this, we look at short-term pullbacks as buying opportunities, but we also recognize that the 6900 level above is resistive. If we can close above there on the daily charts, we would be buyers. We think that in this point in time the market should then head to the 7000 handle next, but ultimately should be a longer-term uptrend waiting to happen. Supportive candles below will also be thought of as potential buying opportunities. 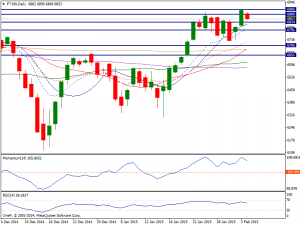 Dax: The DAX soared to new all time highs near 11000 early Europe, as fears over Greece faded out as the country unveiled a plan to swap its debt. The German index closed up 0.58% at 10890.95, holding to its recent gains and with futures trading slightly above it. Strong earnings reports from Santander and Swedish industrial group Alfa Laval also supported the advance. The Dax as you can see gave back a lot of their gains on Tuesday in order to form a little bit of a shooting star. The shooting star is not necessarily a signal to start selling now, as we believe it simply will be an opportunity to buy at lower levels. Ultimately, the 10500 level offers support based upon the gap, and as a result we are buyers only in a market that is most certainly bullish at this point in time and should have plenty of interest. 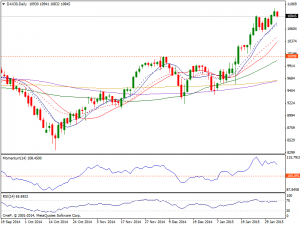 Dow: Dow added 1.76% to close at 17666.40 as the rebound in oil prices diminished concerns of an increasing economic weakness. The Dow still has enough room to move higher and if we pullback we think that supportive candles will offer buying opportunities and as a result we are essentially “buy only” in this market as there should be plenty of buying opportunities going forward. We believe that the market will then head to the 18000 handle and then perhaps break out all the way to the 20000 level given enough time. 17,000 below is massively supportive. 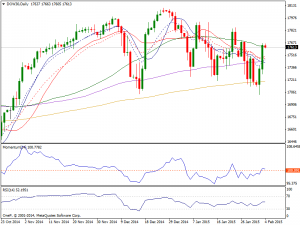