Is it time to buy EURGBP?

We have been talking down Euro for a while now as you may know. We were selling it against the dollar when it was around 1.40 and still believe there is more to the downside there. Our favourite trade has been short EURGBP. I personally was trying to tell everyone on the floor that it is time to sell. Then we have got that confirmed by the Parker’s Strategy and sold it more then. By the time our Trend Strategy also gave us a signal to sell it we as a company had a huge chunk invested in a short EURGBP but did not back out of our believes and sold more on that signal.

In a space of two month we have made between 300 – 350 points on a pair that is not as volatile as the majors. By the end of it we had loads of money in. The question that has started crossing my mind today is there really more to the downside there. All indicators are now showing it as oversold. the RSI is under 30 and the CCI is on the same wavelength. It is 170 points away from the 100 EMA and 250 points away from the 200 EMA.

The next obvious level there is the 0.80 mark. Psychologically a bit level which has acted as both resistance and support. The Euro is also at its weakest against the dollar for some time while sterling has gone up to the highs. In the longer term I do believe sterling will break the 1.70 barrier and EURUSD will fall down to 1.32 and of course if that happens then EURGBP would have no chance and keep heading south. Risking 50 points with the opportunity to pick up 150 and then potentially 250 seems like a no-brainer though.

What I will do is leave this chart here and let you make up your own mind. Let us know what you think and we will see how this plays out over the coming weeks. 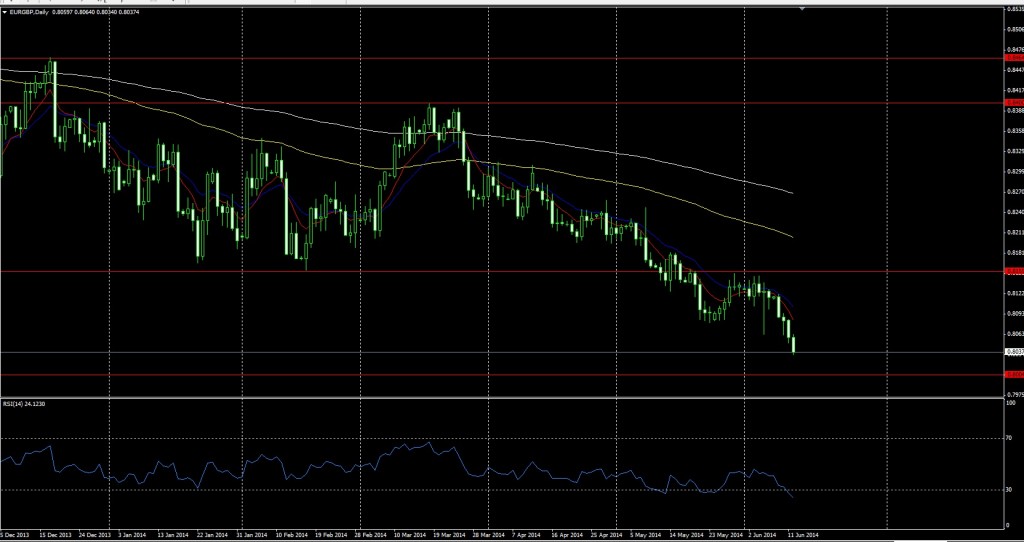