Today we have the release of the eagerly awaited Non Farm Payroll report at 13:30 GMT.

Last months release of the report was well below expected at 74K, although this was largely put down to the weather at the time.  The street is predicting a number of 180K for today’s data, although some analysts are citing the continued bad weather and looking for a worse than expected number again.

We have had bad data this week already in the form of the ISM manufacturing number, which came in at a record miss and the slightly lower than forecast ADP, which has led to murmurs that the Fed may have to stop the tapering if the bad data continues, and although we do not feel a bad number today will mean this, it will certainly fan the flames a bit more and make Yellen’s first press conference as chairwoman very interesting.

Whatever the release of today’s data, one thing to keep an eye on before placing any trades is the revision to last months data.  This could be key, as traders should be looking at the overall number for last month and this month as a sign to see where we really are in terms of the job market in the US.

US stock markets have opened up as well on the expectation of good data, and treasuries slightly down.

An expected or good reading today, accompanied by an upward revision for last month should lead to USD buying.  The market to really look at if this scenario happens is USDJPY, as this should see the most upside.  The yen has weakened a bit the last few days in preparation for this number and we feel the scenario should see a push up in USDJPY with initial target of 103.40, followed by 104.85/90 region 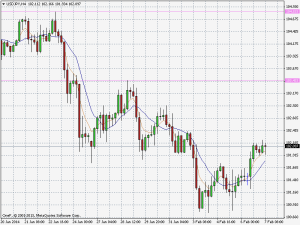 Studies suggest though that the risk for the number could again be to the downside, and a reading of less than 125k, with not much of a revision to last months number, the moves up in stocks and USDJPY could be reversed very quickly.  We feel that USDJPY could reach the key 100.75/60 level with further support eyed at 99.80.

Another factor to keep an eye on at the release time is the US unemployment rate.  This is important as it has fallen the last few months and is very close to reaching the threshold originally set of 6.5%.  Although we have had central bank speakers saying this is not the pre-cursor to raising rates, it would lead to speculation as to what it would mean for the Fed going forward and may require them to provide further information on forward guidance.

We have had bad data this week already in the form of the ISM manufacturing number, which came in at a record miss and the slightly lower than forecast ADP, which has led to murmurs that the Fed may have to stop the tapering if the bad data continues, and although we do not feel a bad number today will mean this, it will certainly fan the flames a bit more and make Yellen’s first press conference as chairwoman very interesting.

A very weak or very strong number could also lead to increased volatility in the Emerging markets, which could show price action similar to a few weeks ago.

One trade that we have been monitoring a lot over the last month or so is the USDCAD.  There is also Canadian employment data out and although that will be far over-shadowed by the NFP, we feel there may be a potential trade setup based on the numbers coming out a certain way.  Last month the Canadian employment data came in a lot worse than expected (-45.9k vs 14.6k) and this led to CAD weakening across the board.  USDCAD has since consolidated this week after bouncing exactly off the Fibonacci 50% level at 1.1223, where we took some of our profits off on our long position.

If US jobs data comes in good and Canadian jobs data negative, this should cause a big up move in USDCAD, and we are looking at initiating long positions on a break above 1.1125 targeting the 1.1223 initially but then a longer trend upwards to the next levels.  Obviously this will only be a potential trade based on how the data comes out but it is something we are keeping a close eye on.

View the data come out live on our economic calendar in our members area.

We also have a live webinar over the non farm payrolls for you to attend to see how our traders trade over the data.  Please register for this via the link.

Canadian data came in better than expected, so we could not really get into the trade we were saying was a potential, as the data was bad US and good Canadian.

US data did come in worse than expected like some analysts were expecting, so it will make for an interesting few weeks as traders await further guidance from the Fed