Big sell on the NZDUSD pair

Good day traders,
As we witnessed last night that the Reserve Bank of New Zealand has increased its interest rates from 3.25% to 3.50% which met the forecast. Even though the bank has increased the interest rates, we saw a big sell to the currency against the US Dollar which dragged it from 0.8760 to 0.85680 (110 pips). The reason behind that was (Buy the rumor- Sell the fact) as the market has already acted towards the forecast figure plus the president of the Reserve Bank of New Zealand said he will wait to see the market reaction towards the new interest rates before he increase them even higher which was a surprise. 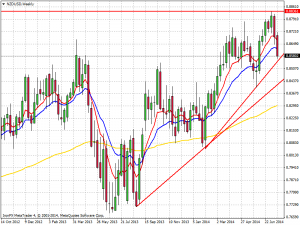 If we break the first trend-line then there is no big level stopping the price from going down reaching the second trend-line and that is around another (110 pips). Also there is a big level shown on the chart 0.8836 touching the highs where the price reached them and inverses back around 0.75 levels. I believe the market will test the first trend-line and once break it we will reach 0.85-0.84 then the RBNZ might come out increasing the rates even higher (which is expected by the end of the year) as it is going to be a surprise to the market where we will go back to 0.87-0.88 areas.
Good luck trading.