Well yesterday saw the Yen take on the US Dollar, which was a theme for most major currencies too. The pair moved to the bottom of the recent daily range. 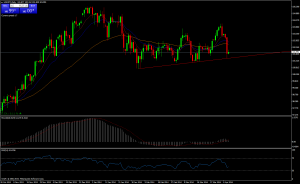 The talk from Kuroda was cool, calm and collected while the uncertainty in the FOMC seems to have starved the US Dollar of any power. A general risk-off feel yesterday seemed to take no mercy on the Greenback too. Once the barrier option at 103 was broken the stops that had built up after a long period of range trading plus speculators taking profits (from the March highs) gave the move momentum that led to a day long snowball effect. The effect was only halted in the evening by the daily support trendline.

There is a lot of potential downside with stops below 101.50. However, the certainty in BoJ policy is attractive but it is a policy that should weaken the Yen against the US Dollar given the Fed’s current line on tapering. We are favouring a retracement from here but all eyes on the Ukraine as, despite what seems a lack of news coverage compared to the recent violence, the Russian policy here could be far more politically troublesome.