The minutes of June’s MPC meeting provide some relief given recent hawkish noises that no members of the Committee have yet started to vote to raise interest rates. Admittedly, the minutes reiterated that “for some members, the policy decision had become more balanced”. But all members agreed that there would need to be more evidence that slack was being absorbed before Bank Rate should rise. Note too that the Committee would not have seen the inflation figures released yesterday showing that CPI inflation fell to its lowest rate since September 2009.

That said, the Committee warned that the “relatively low probability attached to a Bank Rate increase this year implied by some financial market prices was somewhat surprising”, echoing Mark Carney’s warnings last week that rates could rise sooner than markets expect. For now, we still think that further downside surprises on inflation and some cooling down of the housing market will delay a rate hike until early 2015 and mean that any increase when it comes will be gradual. However, the risk of 2014 hike is clearly growing.

That said, we had an initial move up in the value of GBPUSD, but was met immediately by GBPUSD selling around 1.7000 area, making it feel like we will need something extremely special for a break out to the top side.

Below is a chart of the price action: 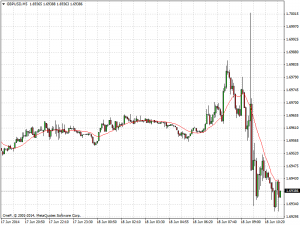