I remain unconvinced that the US$ is out of the technical poop and that we will not see 1.40 against the Euro. 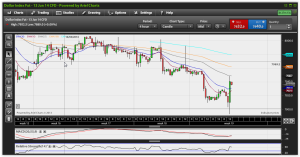 Basically the US$ is not winning against anything except the Euro today…. there has been very little carry over into the other pairs on the back of the $Index rally (Aussie – up, Kiwi -up, Yen -up, Loonie – up, Sterling – almost up, Gold has held the 1286.5). The $Index is nicely capped by the 55 h4ma and the fast dma, which to me just looks like a feeding of the horses before another charge through the ranks at 79 again.

There is a long way to go before rate hikes and the consumer being an essential part of the consumption cycle, and having no money to consume with, will leave the Fed with unfavourable stats comeQ3/4. Not to mention structural changes in unemployment promoting uncertainty. Yellen was again flustered, albeit by rude questioning on policy which is not her domain, and her defense of the progress of the economy is easily matched by dampeners. Having used the word ‘strong’ to describe the necessary conditions for the economy before a rate hike, the US markets have taken this to be a dovish tone. US Bond prices are also generally up (rising with the stock indices is a bad sign anyway, bearish ‘smart’ money Vs bullish ‘dumb’ money).

Draghi’s hint at a some sort of policy change in June my be the only thing in the Dollar’s favour….. and that ‘comfortable with acting’ phrase is far from clear but European markets are up anyway. I would expect some more Euro selling in the short-term but people have short memories and the fundamentals for Euro-land are still good.